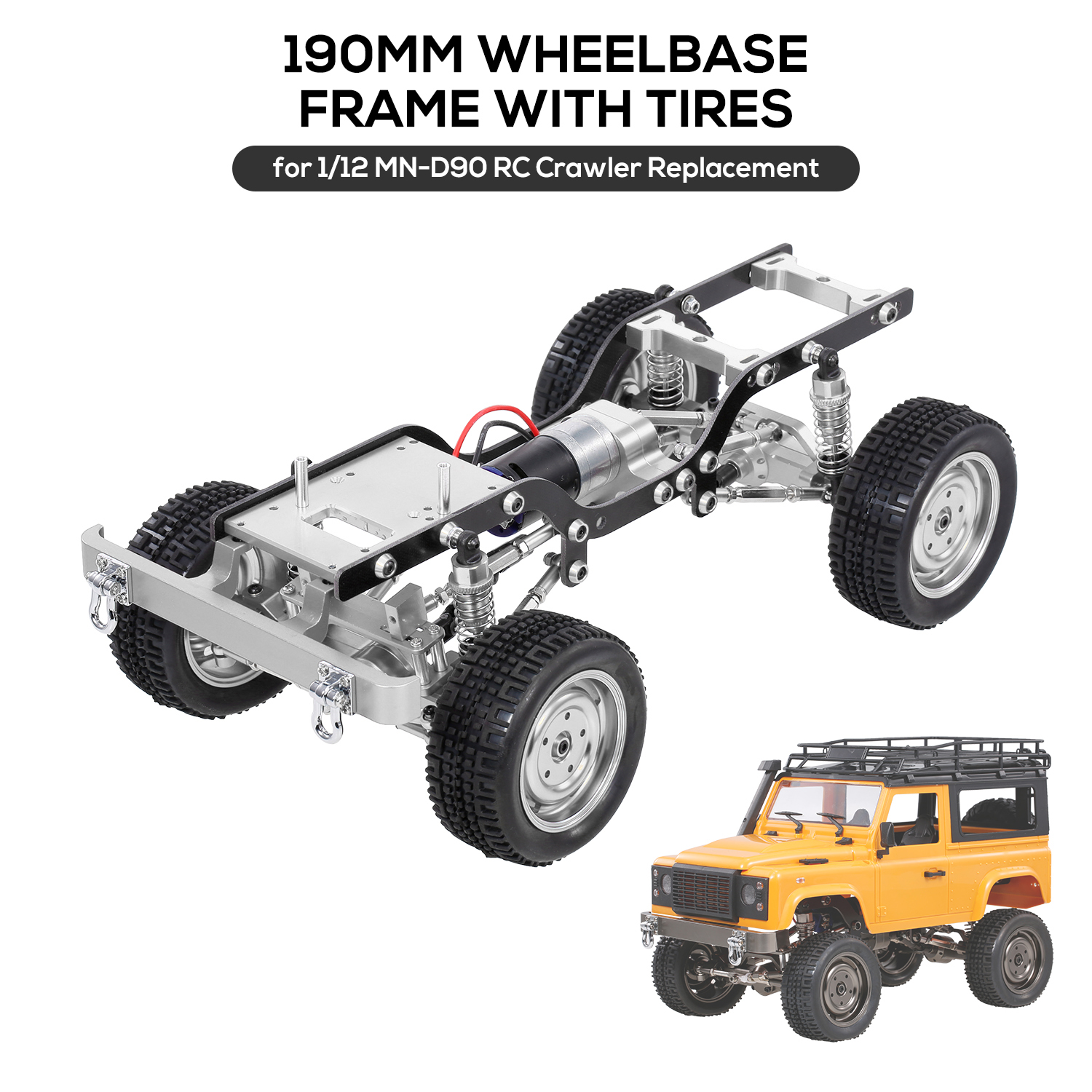 New Posts Since Last Visit
Click here to search for new posts since your last visit
Who is online?
In total there is 1 user online :: 0 Registered, 0 Hidden and 1 Guest :: 1 Bot

This is going to be my detailed review of the RP-05 1/16 Rc car. Essentially, this is a clone of the popular Mini Erevo from Traxxas, also known as the MERV. Just to clarify, the price of this vehicle is about half the price of the merv, so it is not attempting to beat Traxxass in terms of quality, but rather through the price point. Anyways, I received this product in order to make a full review from Gearbest.

Moving on to the actual review, this car comes very well packaged in terms of the protection and presentation aspect. I can imagine this being a popular gift around Christmas time. The box has some general information regarding the product, and is well colored. It verifies that the RP in the model name stands for Rui Peng, which is a relatively unknown rc manufacturer. After opening the box, the first thing presented is the User’s Manual. It is written in both Chinese and English, which is good to see. It is actually quite lengthy, and includes some colour as well. The manual explains all of the items included in the box, and their uses, which will be quite useful, especially for beginners.

Another great thing is that all the part numbers are labelled and listed quite clearly, so finding replacements shouldn’t be a problem. I did find that most of the mini erevo parts are not cross compatible, but a few of them are. Anyways, I found the durability of the truggy to be quite respectable, so finding part support will probably not be a big need anyways. Exploded diagrams of different segments of the car are presented clearly in the manual, so if you ever need to take something apart or put it back together, it should go smoothly. All of the other basic information, such as the setup and charging instructions, are also included. A couple of things to point out are that this car is also available in a few other designs, such as a mini summit. Also, the box incorrectly claims top speeds of 40 miles an hour, while the actual top speed is a little less than forty Km/h.

Continuing on, there is a bunch of accessories included in a plastic bag. First off, there is a substantial screwdriver with a 1.5 mm hex head, as well as an additional Allen wrench to be used when working on the car. A spare servo horn is also included, which is great, because it is possible to run this car on a dual servo set up, just like the merv. The additional linkages for running two servos are also included right out of the box. A sturdy metal cross wrench is also included, for removing and installing some of the hardware around the wheels.

The full set of spare body clips are very useful, as the small 1/16 body clips can be easy to misplace. The most interesting spare part that comes in this ready to run setup is an additional differential gear. I have had no troubles with my preinstalled diff, so I am not sure why they included it, but it is definitely a nice touch. A rack of 12 plastic preload clips is also given, so the driver can tune the suspension to their liking. Those are the accessories included in the box, which is quite an impressive list for a cheap RTR.

Moving on, the charger and battery combo is pretty decent. The plug on the charger I received was North American. If you live elsewhere in the world, just request Gearbest to send you an adapter with the package, and they should be able to comply. Anyways, adapters cost less than a dollar, so that is not a big deal at all. The discharge rate on the charger is poor, at about 350 mAh, but it isn’t surprising, as the battery is quite small, and after all, it is just a trickle charger. The charger does have an LED, which is used to notify the user when the battery is done charging by changing colour. The charger only charges 2s lithium ion cells, which is what the included pack is. It is a soft cased, 1500 mAh, 7.4 volts, 2 cell Li-on battery. It takes around two hours to charge, and gives a
pretty good run time of about 15 minutes.

Now, I know having a Li-on power source may be looked upon as a negative, but I found the performance to be almost identical to that of a standard 2s lipo. One drawback is that the battery loses some efficiency because of the heat it generates, as I did notice that it was quite hot after a full bashing session in the dirt. The connector is a common mini Tamiya-style plug, and since the battery fit in the battery compartment with plenty of room to spare, getting additional batteries should not be a problem. Overall, while the charger and battery combo isn’t the greatest, it is justifiable by looking at the price, and it does get the job done.

The next item in the box is the transmitter. It requires 4 AA batteries, which are not included. It obviously uses 2.4 Ghz control frequency, and it features fully proportional steering and throttle control. I was able to get 200 feet of range, which is more than enough. The throttle and steering throw are satisfactory, although the wheel is just plastic, without any rubber or foam cover. The steering trim is very easy to adjust, as it uses an analog-type control, which is recessed right above the wheel. There is one green and one red LED on the remote, which let you know when you are bound e.t.c by flashing.

A servo reverse option is also included, for the drivers preference. The bind button on the top of the remote never came into use for me, but it is there, in case of difficulty connecting the radio to the receiver. One really strange feature on the transmitter is a flashlight on the front. It is really bright, and also, in my opinion, pretty useless. But, I guess it doesn’t negatively affect the performance of the car, so it doesn’t matter. The remote is pretty ergonomic and comfortable to hold, so I have no complaints on that end.

The last, and most important item in the box, is the car itself. It is about 14 inches long, and has some heft to it. The body is available in both red and yellow. In my opinion, the yellow looks better on the buggy. It is made of standard lexan, and is relatively thick, so it has stood up to some abuse. It is pre-painted and decaled, so you do not have to bother with decorating the body. One thing I found is that if you want to fit an erevo body on the rp05, or vice versa, you will have to adjust the body posts. The included wheels are a flashy orange, but they are just hard plastic. They use some pretty standard size wheel nuts, so you should be able to fit different wheels on it easily. The tire tread has a really sleek look to it, and they perform well, especially on grass and pavement. The tires do have foam filled inserts, which are quite soft.

The dogbones and suspension arms are both aluminum on the rp-05, which is one place where it beats out the merv. As this car is a 4WD system, it also has front and rear differentials. The battery doors open outwards, and only one of them is functional, as the other holds the esc and receiver. Speaking of the receiver and speed controller, they perform well, but lack adjustability, in terms of input ports and such. In the future, I might look at installing a hobby grade esc and receiver. The stock electronic speed controller can only handle 2 cell packs, and it is listed as 40a. The motor is a 390 sized brushed can, and is sufficient for the car, although I would look at installing a 540 motor. A big aluminum heatsink comes attached to the motor, and it is effective at keeping temperatures down.

The stock servo performs well, although I would prefer a little more centering speed. The option to upgrade to dual servos is one I will definitely look at. A really cool feature is that this rc utilizes the same laid-down revo style shocks as the merv, with the cantilevers. These shocks require preload clips, as they are not threaded. The entire truck runs on ball bearings, which is good to see in an RTR. I found that the suspension benefited from some more shock oil. There is an on/off switch, which can be reached with some difficulty when the body is on. The front bumper is very flexible, so it does a good job cushioning impacts from head on collisions.

There is a rear spoiler, which adds to the aggressive look of the truck. The wing is removable via two body clips. Right under the rear spoiler is a small wheelie bar. On the stock battery, its main use is to protect the back of the car, but if you upgrade the electronics and run a 3s lipo, it will come into play more often. The linkages and plastics on the RP05 are quite beefed up, and I haven’t had any breakages yet. The differential outputs are also aluminum, which is excellent for durability. The car is very easy to use, and it has good driving characteristics. The handling is smooth, and the throttle linearity is excellent. The speed, especially for a 1/16 scale, is pretty fast. It tops out in the mid 30’s in terms of km/h.

To conclude, this traxxas mini erevo clone is a really fun rc, and anyone who purchases it will not be disappointed. Considering the merv is two times more expensive, I would say this is a better value for the money. I hope this review was informative.

Also, Gearbest is having their Black Friday sale right now.